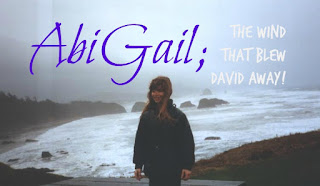 Have you ever been to the ocean during a storm? A gale at sea shivers the timbers of seasoned sailors. They understand the driving force of those winds can tear a sailboat apart. David’s Abigail was a different wind; she blew him to the harbor of humility. For those unfamiliar with her story you’ll find it in 1 Samuel 25: 2-42.

The debate I’ve heard through the years concerning Abigail’s character outrages me. Some Bible scholars (I use the term loosely) defame her as an unsubmissive wife.  She did, after all, violate her husband’s will and called him a fool publicly in the presence of a known dignitary. So I see how those teachers come to that position but I can’t get past the fact that God, in 1 Samuel 25: 3, declares her to be “a woman of good understanding.” Debate closed!

When the servant made her husband’s blunder known, she did not have to intervene. There was another option that would have freed her from her abusive husband. She could have told the servant to pack their bags and high tailed in out of Carmel before David and his army came. Voila! No more Nabal. Abigail’s beautiful appearance could snag her a better husband in no time and as a widow she’d be free to remarry. Wise people know the easy way out is seldom the right way out and Abigail was wise. She set her own interests aside and considered the lives of her servants and even her foolish husband’s as better than her own. She also considered how this action could tarnish David’s future position as King.

When Abigail’s servant told her what Nabal had done to offend David and that David would certainly retaliate, the servant feared for his life. This shows us a few things about her character;
1.       Abigail was approachable.
2.       She was reasonable.
3.       She could be trusted to do the right thing.
4.       She got things done.

That’s exactly what she did. She humbly approached David on behalf of her household and paid him for the protection he had provided to her and Nabal’s shearers. She confessed and took responsibility for her husband’s foolishness. Plus, she encouraged David not to let his righteous temper to get the best of him. Yes, going against her husband’s sinful will and telling her future king to hold his anger were the right things to do. She didn't care if it made waves. Sometimes it is right for women to admonish their leaders and defy their husbands. 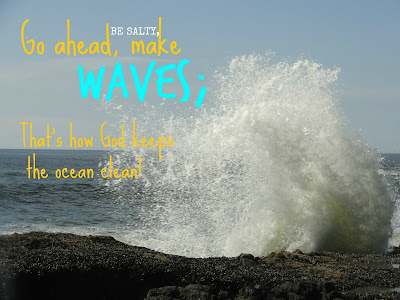 Her bold choices don’t end there. She could have sneaked back in the house and never said a word but that would not have provided necessary edification to Nable. When she saw he was drunk she knew he couldn’t receive or even remember her counsel. So she waited until he sobered up and rebuked him. He literally had a heart attack. About ten days later the Lord gave Abigail her freedom from the fool. When David heard Nabal died he swooped in to harness the gale that had blown him to safety. He wanted that excellent wife as his own. He knew as king he’d need a counselor wise enough and bold enough to watch his back and keep him in his place. He saw Abigail as God described her, “a woman of good understanding and beautiful appearance.”

So Sisters, are we women of good understanding? Are we brave enough to speak the truth in tough love? Sometimes leaders need leading. Sometimes God uses a wise woman to do just that.

Next Friday is the last Show & Tell installment. Hope you'll be back to see just how appalling good communication can be.


Father, how desperately we covet your wisdom and discernment to know what is right. Even more desperately we need boldness do to the right thing. May Your Spirit be the gale that drives us to be audacious and speak your truth in love.